I was born in Marseille into a family of fishmongers. Very young, I already wanted to become a cook and I entered the Hotel School of Thonon-les-Bains at the age of sixteen. Then, my appetite for learning pushed me to continue in great starred restaurants and Relais & Châteaux in France and elsewhere.

It was at l’Escale, in Carry-le-Rouet on the shores of the Mediterranean, that I did both the most important meetings of my life: Bernadette, the dining room manager, who will become my wife and the mother of my two boys, as well as Charles Berot, a two-star chef who will be my mentor.

Twenty-five years of great activity followed in Apt in the Luberon, the capital of candied fruit. I opened the Auberge du Luberon there, which quickly won a star, where I innovated with regional cuisine with candied fruit. Here I am Master chef of France, Escoffier disciple, regularly invited on FR3 and France Bleu Provence, visible as far as Canada, the United States and Japan. Recipes for magazines including “Madame Figaro”. A whirlwind!

This shows our pleasure when, during a trip to Morocco, Bernadette and I discovered the port and the medina of Essaouira. Immediately, the city reminded me of the Marseilles of my childhood. We really wanted to move there, a desire that came true when we found this picturesque Riad, hidden in a quiet alley in the old town.

It is an intimate and closed place – you have to ring the bell to enter. I found the sea there, its fish and its shells. I discovered another happiness to create, to play freely with new flavors, with spices and colors.

O’ Bleu Mogador is today a table that counts. I will be very happy to welcome you there. 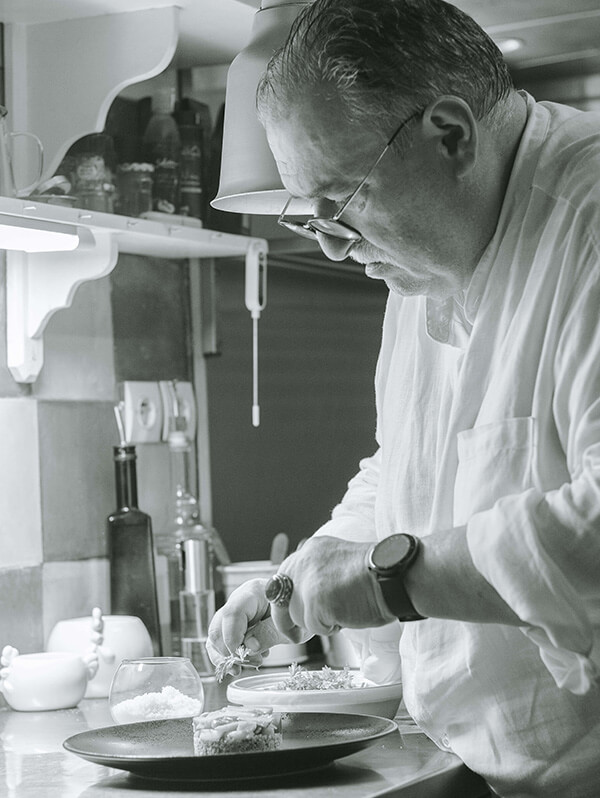